Are you compliant with the Modern Slavery Act?

Do you have certainty around your supply chain and the Modern Slavery Act (2018)?

All your required data collected and visualised in one simple web-based solution:

Customised interfaces with your branding and preferred layout

Seamless integration of existing, historical and third-party data via APIs

The answers to your key questions

How is modern slavery relevant to your organisation?

What are your obligations under the Modern Slavery Acts?

How can you identify modern slavery risks?

How can you address and mitigate those modern slavery risks?

How can you measure impact?

How can you prepare a modern slavery report?

Our friendly team would be more than happy to assist you with your enquiry, demo request and suggestions. Contact us on 1300 552 335 or email us at [email protected].

What is Modern Slavery?

Different countries use different legal terminologies, but “modern slavery” includes the crimes of human trafficking, slavery and slavery like practices such as servitude, forced labour, forced or servile marriage, the sale and exploitation of children, and debt bondage.

​According to the Global Slavery Index, there were approximately 15,000 people living in “conditions of modern slavery” in Australia in 2016.
Globally it is estimated that there are over 40 million people engaged in Modern Slavery. About two thirds of the global slave trade occurs in the Asia-Pacific. Some of Australia’s biggest trading partners, including China, Malaysia, Indonesia and Thailand, are host to some of the most egregious crimes. Which means, that while your internal practices and many of your tier 1 suppliers might clearly display no signs of modern slavery, the probably of finding slavery in your deeper tiers is highly likely. In fact, a survey conducted in 2015 of retailers and their tier 1 suppliers found a 71% likelihood of slavery in their supply chains. If you haven’t identified it yet, it is probably because you are not looking in the right places.
(Ashbridge Centre for Business and Sustainability)

What is the Modern Slavery Act?

The Modern Slavery Act 2018. is an Act that requires entities based, or operating, in Australia, which have an annual consolidated revenue of more than $100 million, to report annually on the risks of modern slavery in their operations and supply chains, and actions to address those risks.
Reports are kept by the Minister in a public repository known as the Modern Slavery Statements Register. Statements on the register may be accessed by the public, free of charge, on the internet.
Organisations are required as part of the report to submit modern slavery statements, describing the risks of modern slavery in the operations and supply chains of reporting entities and entities owned or controlled by those entities.
The statements must also include information about actions taken to address those risks.
Joint modern slavery statements may be given on behalf of one or more reporting entities.

What Do Organisations Need to Address When Submitting a Modern Slavery Statement?

Where Can I Find More Information About How to Address this for my Company?

​Informed 365 has helped some of Australia’s biggest companies, prepare for their Modern Slavery reporting statement. We would be most happy to walk you through the process we have taken with other reportable entities. Please call us on 1300 552 335 to speak further.

Below, are some links to other informative sites:

Does my Organisation Need to Submit a Modern Slavery Statement?

What Happens if Our Modern Slavery Statement is not Accepted?

Get access to our webinar series where we discuss with the experts everything Modern Slavery, including:

✔️ The do's and don'ts, and expectations going forward
✔️ Key compliance trends across first statements & next steps
✔️ The practical challenges of reporting & COVID-19
✔️ Corporate examples of the 'poster child' for CSR
✔️ Watch it in your own time 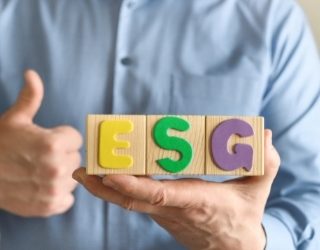 For ESG to be effective, rather than ad-hoc, you need a well-defined and holistic strategy. ESG must be intrinsic to the values of your organisation, and guide the decisions you’re making every day; rather than an afterthought or a box to tick.

END_OF_DOCUMENT_TOKEN_TO_BE_REPLACED 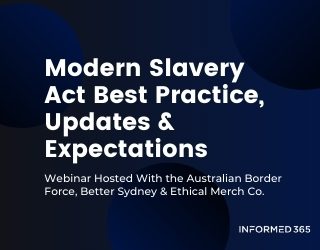 Missed our Modern Slavery Act Update from August 2021? View the recording here to get the latest from the Australian Border Force, as well as case studies from Better Sydney and Ethical Merch Co..

END_OF_DOCUMENT_TOKEN_TO_BE_REPLACED 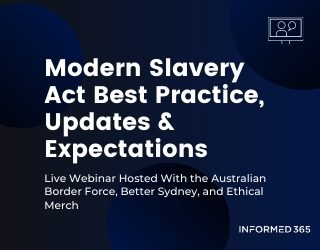 Live Webinar: Modern Slavery Act Update with the Australian Border ForceGet the key learnings from statements so far, understand expectations for 2021/2022 reporting, and get working examples of best practice. This free webinar is presented by Informed 365 with...

END_OF_DOCUMENT_TOKEN_TO_BE_REPLACED
We use cookies on our website to give you the most relevant experience by remembering your preferences and repeat visits. By clicking “Accept”, you consent to the use of ALL the cookies.
Do not sell my personal information.
Cookie settingsACCEPT
Manage consent